FMQB: The Tie that Binds 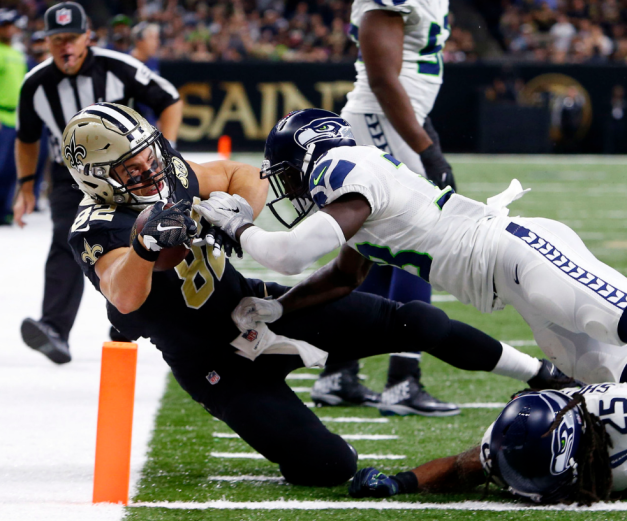 FMQB: The Tie that Binds

It’s hard for me to say it, but the best QB in the league is Tom Brady; which is amazing at 39 years old. I think he even gets put into the MVP race despite the fact that he’ll only play ¾ of the games any other QB plays. He has a whopping 133.9 passer rating, is still on pace for nearly 4000 yards (despite missing 4 games), 12 TD’s and 0 INT’s. Just insane numbers to start the season.

Ties are a rarity, so much in fact that many NFL players don’t know that games can end in a tie. From 1974 to 2008, there were only 17 ties; exactly 1 tie every 2 years. But there has been a bit of an influx recently, which could be equated to the new OT rules that each team possesses the ball (barring a TD). There have been 5 ties in the past 4 years. Believe it or not, with only 32 ties since 1974, this is the 2nd time in that span that ties have come in back to back weeks. While this is an improvement from 1920 when there were 17 ties, the NFL needs to figure out a way to find a winner. Hockey did it, and 3 on 3 OT and the Shootout are the most exciting parts of the game. My suggestion is to play their 15 minute overtime. If there’s no winner, trot the kickers out to the 35 yard line and have them kick. If they both make it, back it up to the 40…and so on until one misses. It’s going to come down to a kick anyway, so why not give it to the kickers. But now 4 teams are X-X-1, which is just stupid.

Ironically, all 4 teams (Ari, Sea, Cin, and Was) made the playoffs last year. But the ties actually hurt their records, with only 1 team (Seattle) actually sitting in a playoff spot right now.

I wonder why NFL ratings are dropping? A recent stretch of 4 nationally televised games consisted of a Tie, Brock Osweiler, Titans vs. Jaguars, and another Tie. That’s 2 ties in 4 NFL games!

This season has been rough on kickers but kind to fans. We had another instance of a very short OT game winning kick that was missed by Redskins kicker, to equal the 2nd tie of the year. Any talks about narrowing the uprights may be premature. The Cardinals would be 5-3 and alone in 1st without their kicking woes; Redskins would have the same record and be alone in 2nd in a tough NFC East.

It’s no secret to FMQB readers that my reviews for “God’s Gift to Man” Cam Newton aren’t exactly glowing. I would say that it got a bit more positive for me last year, but he still doesn’t do it for me. Cam had a huge rant at the refs and the NFL in general for missing calls; saying he “doesn’t feel safe back there.” Of course you don’t feel safe back there, you’re a QB in the National Football League. Every snap you have 11 guys that would love to lay you out! I loved how a Steelers Tackle ripped into him and completely called him out for his remarks.

For the record, the NFL reviewed everything and admitted to missing only 3 calls in the past 3 ½ season. There are 11 other QB’s with more missed calls than Cam. Maybe if he wasn’t such a baby, didn’t celebrate as much, or showed some respect to the game; maybe it would reciprocate back to him.

Rob Gronkowski just set the franchise record for Patriots TD’s. He’s only 27 years old. If you count his injuries, he has essentially played less than 6 full seasons. He is on pace to break the record for Tight End TD’s by age 31.

Something is definitely up with Russell Wilson, I think his ankle injury is more prevalent than they’re letting on. He is in his 5th full season, and his rushing yards in his first 4 were 489, 539, 849, and 553 respectively. This year, he has a whopping 44 yards. He was averaging 5.9 yards per carry coming into this year; he’s at 1.8 yards in 2016. Wilson also only has 5 TD’s through 7 games, and 0 rushing TD’s.

Oakland had a crazy game. They are now 5-0 on the road, but set the NFL record for most penalties in a game for 23. They needed every bit of 600 yards on offense to win the game. Probably because they also went backwards 200 yards in the game.

The Cowboys Eagles rivalry has encompassed 114 games. Only 3 of which have ever made it to OT, and they’ve had back to back matchups in OT. That means before last season, there was only 1 overtime matchup in 112 games.

Primetime Stat of the Week #7:

Sounds like NBC has the scheduling edge over ESPN. It was the 3rd Sunday Night Football game in a row that went into OT, and 6 of the 8 contests have been within 6 points. They’ve got another good one coming up with Denver at Oakland. Monday Night Football hasn’t fared quite as well, with only 1 of the 9 games ending within 10 points of each other.

If the Playoffs Started Today:

Patriots and Broncos would be the #1 and #2 seeds again (although flipped).

Super Bowl silver medalists, the Panthers would be guaranteed a Top 5 pick

“What did you say? You want to be traded to the Browns?” Bill Belichick

As if the Browns aren’t bumbling enough, now their fans are getting into it. A 3 sheet banner that was supposed to read “Dawg Pound” got inadvertently rearranged to read GPO-DAW-UND. Smooth…

The Browns are 0-5 since Pryor suggested they could win out. They just blew a 13 point halftime lead against a team with a QB crisis.