FMQB: Game of the Year

I will get to the game of the year shortly, but is anybody else as happy as I am that nothing happened “off the field” in the NFL this week? Well maybe Roger Goodell is. Either way it was refreshing that the injury report only had football players on it this week…

In this column I try not to mention the Rams too much, but man when they were up 21-0, yours truly was giddy, proclaiming “If the 49ers can beat the Cardinals, the Rams will be tied in 1st place!” The second I said that, the Cowboys mounted a crazy comeback, outscoring the Rams 34-10. Not gonna lie, I am totally drinking the Austin Davis kool-aid this year, but that game was a letdown. There was a glimmer of hope for the season had they pulled that off.

If the Playoffs were to start today:

The Cardinals and Bengals would be the #1 seeds. Try telling that to somebody in 2004!

END_OF_DOCUMENT_TOKEN_TO_BE_REPLACED

I am going to do something completely drastic this week. Something that ESPN and every sports talk radio show refuses to do this week…talk football.

Yours truly was sooooo excited for football to start 2 weeks ago, the offseason seemed longer than normal. I was slightly disappointed to start the season watching lackluster games. My slate started as Seahawks vs Packers (20 point rout), Vikings vs Rams (28 point rout), 49ers vs Cowboys (11 point rout, but it wasn’t that close), Colts vs Broncos (7 point, but I fell asleep with the Broncos up 21), and then Detroit vs Giants (21 point rout). Rather disappointing, and it was only getting worse as we watched the Ravens kill the Steelers and then the Vikings get killed by the Patriots last week. I was on a role of 7 crappy games! But then all of a sudden it’s like a switch flipped, and I was trying to watch the Rams, Packers and Chargers all win last second games at once. Then the Bears crazy comeback on Sunday followed by the Eagles comeback on Monday, and I think it’s safe to say that football is back! (Watching the Falcons rout the Bucs last night didn’t help my case.

“Timeout, we’re not ready to win”

FMQB has always been amazed at the amount of coaches who call timeout to ice kickers, and then see the kicker miss the “practice” kick, but then drill the real deal. Sunday’s timeout mishap involving the Jets was probably the worst I’ve ever seen. Down by 7, “somebody” called timeout right before Geno Smith threw a 37 yard bomb to the endzone for a TD. By rule, only the head coach can call timeout from the sideline, but the ref somehow heard a Defensive Tackle call timeout, and then looked to see the Offensive Coordinator calling timeout. It was surprisingly granted to them and it cost them the game in a crazy turn of events.

END_OF_DOCUMENT_TOKEN_TO_BE_REPLACED 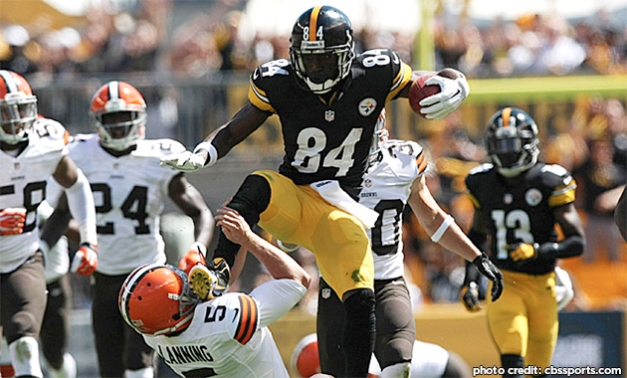 Well Week 1 is over and we all know where our teams are going to end up. I love how some shows are already panicking about the fates of their teams this early, so this installment will have me doing the same.

There are 3 things that are certain in this life; death, taxes, and the Patriots winning the AFC East…Well for the first time since Tom Brady came in the league in 2001, the Patriots are alone in last place! Miami pulled quite an upset against the Patriots, scoring 23 unanswered points and shutting the Patriots out in the 2nd half with two strip sacks on Brady. Buffalo also pulled quite the upset, going into Chicago and winning it in OT. I’m not sure I can handle the playoffs without Brady, but a nice January Miami game will sure be fun to watch! END_OF_DOCUMENT_TOKEN_TO_BE_REPLACED

The 2014 NFL season is shaping up to be an odd one. In my mind, there are only 2 elite teams atop each conference; the AFC has the Broncos and Patriots while the NFC has the Seahawks and 49ers. After that there seems to be plenty of “good” teams but no real “great” teams. My first instinct thought this was rather disappointing, but then I realized that we could have a crazy year with a lot of shuffling of teams.

FYI- this first post is very long every year, so if you want a cliff notes version, read everything but hold off on reading analysis on EVERY team. Just pick a few you’re interested in.