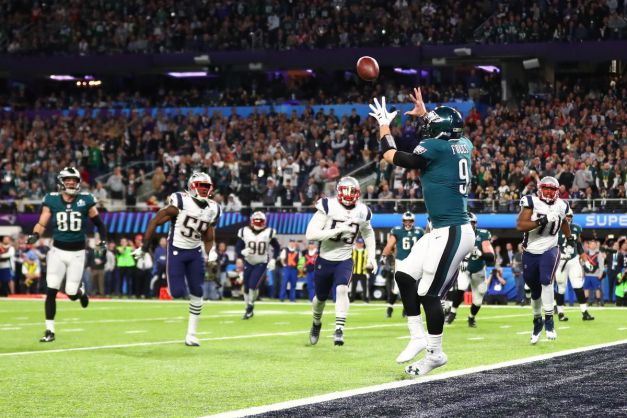 I’m really not too sure what to say about this year’s game. It for sure was an exciting game, I think I’m a bit still in shock at the outcome. Nick Foles was tasked with outdueling the best QB of all time, and even despite a couple strong comeback attempts, he was able to do so.

Both teams opened with opening drive field goals. The Patriots scored points for the 1st time in the 1st quarter under Belichick, which should have been an ominous sign of what was to come. It only got more bizarre from there. Philly scored a TD but missed the extra point to give it a strange 9-3 score at the end of 1.

New England opened the second with a rare missed FG by Gostkowski. So rare, that yours truly used that play to run to the bathroom (in order to not miss commercials), and was surprised to see the score when it came back on. The first and only punt of the game came next, and then the Patriots turned the ball over on downs. Then came NE field goal, PHI interception, NE touchdown. Then PHI drove 70 yards in under 2 minutes and set up “The Philly Special.” Earlier in the game the Patriots tried a pass to Brady but he failed to catch it. The Eagles ran the play to perfection and TE Burton threw it to Foles in the endzone. 2 things I loved about this: First, watching Foles stand like a statue while the play developed before running took an insane amount of patience. Second, NFL films caught Foles and Coach Pederson discussing it. It was 4th and 1 (which is gutsy as all get out in the Super Bowl), and Foles asks Pederson “Philly Special?” Doug takes about 5 seconds but says “Yeah let’s do it.” Trick plays in that scenario when you’re guaranteed 3 points is just so high risk high reward that it’s hard to call. But that’s the only way to beat the Patriots, is to keep the foot on the gas. Philly up 22-12 at halftime (guarantee nobody had that in their pools).

END_OF_DOCUMENT_TOKEN_TO_BE_REPLACED

This football on the field is from the Super Bowl LII style guide for useage of logo.

The city is abuzz, the game is 48 hours away, and much like our last election you’re basically going to be upset with whoever wins! It’s pretty sweet to have the Super Bowl in my own town, I live 4 miles from the festivities and it’s neat to actually have Minneapolis put on the map for once. More info next week, but I got to work at the Super Bowl experience!!!

Despite me wanting nothing more than winter to be over, we’ve actually had a surprisingly mild January for Minnesota. Have had at least two 40 degree days, probably four other 30+ degree days. But the football gods laughed and laughed when they sent down single digit weather for all the tourists at the end of this week. This will look great for scheduling another Super Bowl here… For the record, Minnesota has a tendency to overuse slogans. My main pet peeve is the “State of Hockey,” but the “Bold North” slogan is really starting to inch up there for me. 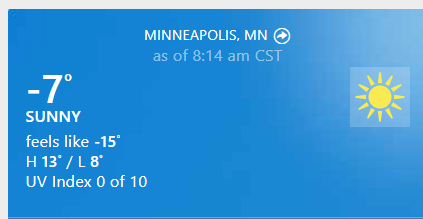