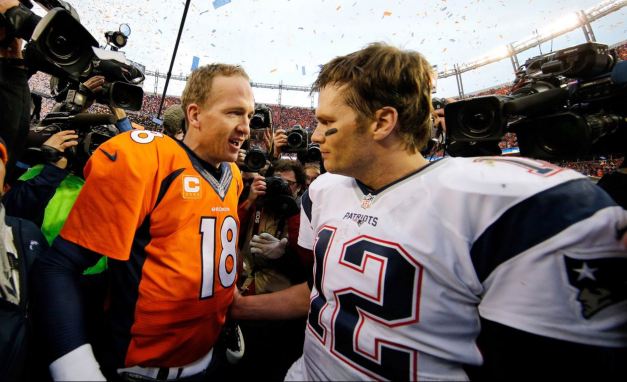 The Broncos and Panthers played to their style on Sunday, with the Broncos winning their 11th game that was decided by 7 or fewer points, and the Panthers getting out to a fast lead and blowing out a team by 10 or more for the 8th time this season. One game wasn’t over until the final play of the game, while the second felt over in the 1st quarter yet.

As was predicted, this wasn’t QB vs. QB, but more “will the Broncos defense give Brady fits” vs. “Can Manning’s arm hold up enough to let the run game win it for them.” The Patriots shocked all by electing to receive the kick, but had to punt on their first possession. The Broncos then scored a TD on their opening drive which was rare for them this season, and ultimately hold the lead until the end of the game. When the Patriots scored to finish out the 1st quarter, the amazing happened. Stephen Gostkowski, arguably the most accurate kicker in the NFL right now, missed an extra point! The year the rule was changed and everybody was clamoring on how great the rule change was, he missed the extra point!!! Arguably more people are in favor of this rule since it cost the Patriots the game, but I digress….it truly made the difference in the game. The Patriots were down by 8 for most of the game because of it. It also didn’t help that Brady seemed to be getting hit every single play. He looked frazzled. In the 4th quarter, on 3 consecutive drives, the Patriots faced 4th down tries while in FG range. The first 2 failed and they turned the ball over. The final drive of the game they went 3 and out at the 50, and faced 4th and 10 with 1:34 left. Brady amazingly hit Gronkowski for a 40 yard gain, and all of a sudden it was a game with 1st and Goal with a minute left. A few plays later it was 4th and 4, the 4th time the Patriots had a 4th down in the 4th quarter (sorry for all the 4’s). Brady seemed to throw the ball away, in between two Denver defenders, but miraculously Rob Gronkowski jumped through the middle and caught the ball for a TD! It was then 20-18 and the Patriots had a chance to tie the game with a 2 point conversion. Their entire season had come down to one play, only needing 2 yards. You could cut the suspense with a knife! Brady threw the ball to Edelman, it got tipped and intercepted, icing the game for Denver. It was a game for the ages between two of the best QB’s of all time.

With 3:00 left in the 3rd quarter, the leading rushers for both teams were Tom Brady and Peyton Manning. Before this, Peyton Manning’s season long run was -1 yard.

Brady had 4 4th down conversion attempts in the final 7 minutes of the game. Had Belichick kicked a FG for 3 of those, the Patriots would have won

Stephen Gostkowski was 52-52 on extra points this year (one of only five kickers to do so). He had also made 523 extra points in a row, hadn’t missed on in over 10 years!

Peyton Manning is 3-1 versus Brady in the A.F.C. title game.

The Broncos beat the Patriots twice in two months. They did it by outrushing them a total of 278 yards to 83 yards.

Brady was sacked 4 times on Sunday, but hit a whopping 20 times! This was the most hits a quarterback has taken since 2006.

Irony of the Week:

The rule to push the extra point back 13 yards was proposed by….wait for it….the Patriots!!!

Since the Colts have moved on from Manning for Luck, Manning has taken his team to the Super Bowl 2 of those 4 years. Three years into it, it looked like a good move to go to Luck, but wondering if Colts fans are questioning that after this year.

After the amazing Bronco game, this one felt like a bit of a letdown. The Panthers dominated every aspect of the game, scoring 42 points and 476 yards on offense, 7 points and 7 turnovers on defense, and 6 points and a fumble recovery on Special Teams. The Panthers went up to a quick 17-0 lead in the 1st quarter and never looked back. At one point in a critical error, the Cardinals actually stopped the Panthers’ offense and seemed to have a bit of momentum, but the Patrick Peterson fumbled a punt and gave it right back to Carolina which led to a TD. Peterson needed to make up for it, and did when he intercepted Newton and returned it to the 22 yard line. But the very next play Palmer threw an INT himself and squashed that momentum as well. The Panthers scored 21 points off of turnovers, and didn’t even need that to handily win the game 49-15.

“Wow, that extra point could come in pretty big later” FMQB in the 1st quarter

“This might be my last rodeo” allegedly said by Peyton Manning

Super Bowl preview! It was hard to go through this one without talking about it much, but the off week won’t affect FMQB!