FMQB: The Miracle in Miami

FMQB: The Miracle in Miami 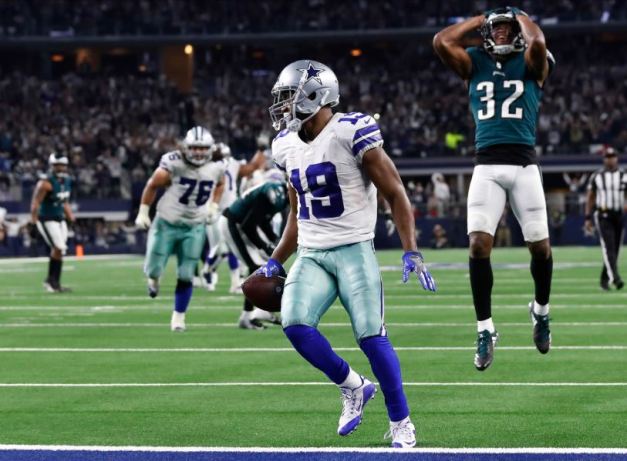 What an absolutely crazy and insane weekend in the NFL! This by far had the most upsets, surprises, crazy plays, and it kept going with last night’s last minute Chargers win!

Take a look at these upsets from last week:

Aaron Rodgers set the new record for most pass attempts without an Interception. With as much flak as he’s gotten for poor play, when you look at the stats it doesn’t support that. He has 22 TD’s and 1 INT

Baker Mayfield is the 3rd QB in NFL history with a TD in his first 10 games. The other two are Marino and Warner

Sunday was Sean McVay’s 29th game as a head coach, and only the first time the Rams didn’t score a TD

TE George Kittle set the franchise record for the 49ers (yes, beating Rice, Taylor, Owens, and other greats) with 210 yards receiving. Oh, I forgot to mention, he had the record by halftime

Quiz time, guess which QB has the most rushing yards in a 3 game span, and just demolished Michael Vick’s record of 294 yards during that span? Cam Newton? Nope. Lamar Jackson has to be it now! Nope again. Josh Allen!!! And he has the record by 39 yards

Since holding a 4th quarter lead over the Patriots in last years AFC Championship game, the Jaguars are 4-10.

The Miracle in Miami:

Hands down play of the year, which is why 1 play is getting it’s own section. There are so many things to talk about! First off, the Patriots absolutely blew basic situational football at the end of both halves which just never happens. Brady took a sack and the clock ran out in the first half, and then the Pats defense was not ready for the hook and lateral. For as good of a coach Belichick is, why the hell was Gronkowski on the field for the final play? There’s no QB in the league that could have made that throw, especially since most Hail Mary’s are thrown way behind the line of scrimmage anyway, so 75 yards by Ryan Tannehill? Never going to happen! Apparently on the Patriots radio broadcast, after the play happened there was 35 seconds of silence haha! For the record, “The Miracle in Miami” already has it’s own Wikipedia page.

Fairly surprised that Lamar Jackson remaining the starter over a healthy Joe Flacco. Although he’s 3-1 and almost beat the Chiefs at home. But other than his rushing, his stats are pretty mediocre. Jackson is completing 58% of passes and 4 TD’s to 3 INT’s. Bold move, especially for a team that is holding the 6 seed with 3 other teams tied with them.

So, truth be told these crazy scenarios never work out. HOWEVER! There are 2 very likely scenarios, in which the Packers could still make it in, as well as the Giants who started 1-7. Because this isn’t “the Cardinals need to beat the Rams and it happens” type of scenario, they’re all realistic, I feel compelled to bring it up.

Packers: Of course the Packers need to win out, but they’ve already beaten the Bears, and the Jets and Lions should be doable. THEN, they need the Redskins to lose 1 game (with a 3rd string QB, they’ll probably lose all 3), the Panthers to lose 1 game (they’ve dropped 5 in a row), and the Vikings lose 2 of their last 3.

Giants: Also need to win out. BUT, they play the Titans, Indianapolis, and a Dallas team that will likely be resting. Tough, but very doable. Then, they need the Vikings to lose twice, Packers lose one, Panthers lose two, Eagles lose 2, and Redskins lose 2. And looking at the schedule, those are VERY possible.

“So whoever’s watching that in New York should stay off the bottle”- Malcolm Jenkins. Haha, while funny, he should expect to be writing a check to the league very soon! 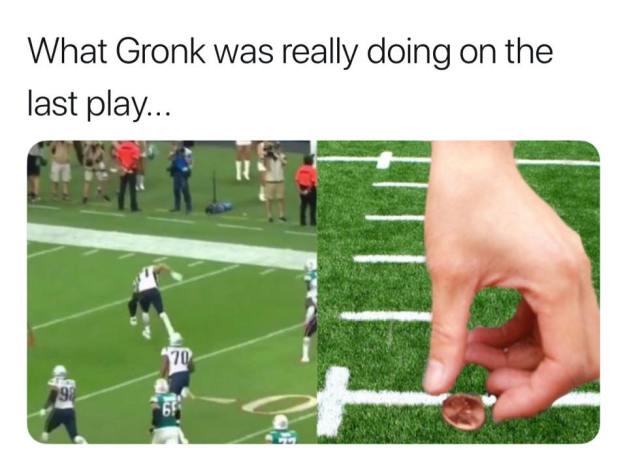 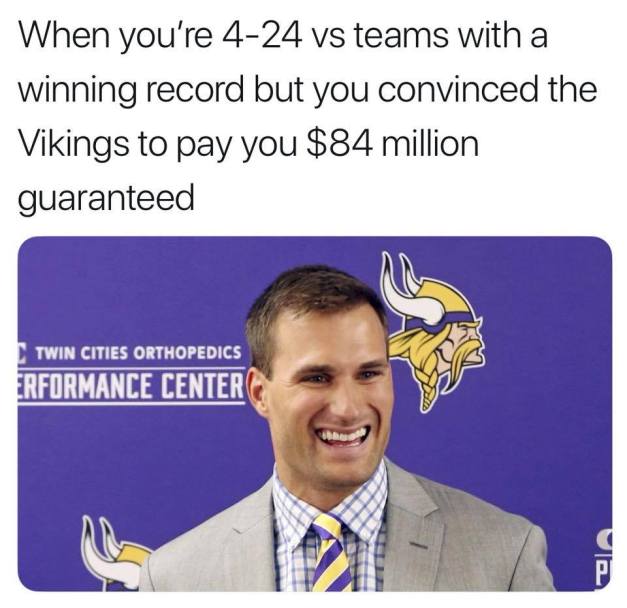 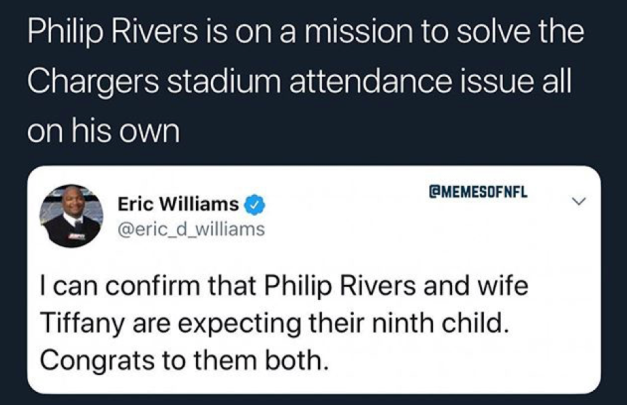 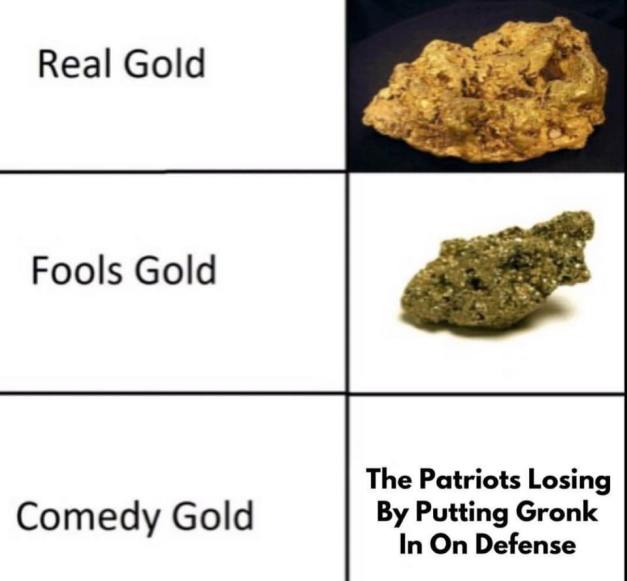 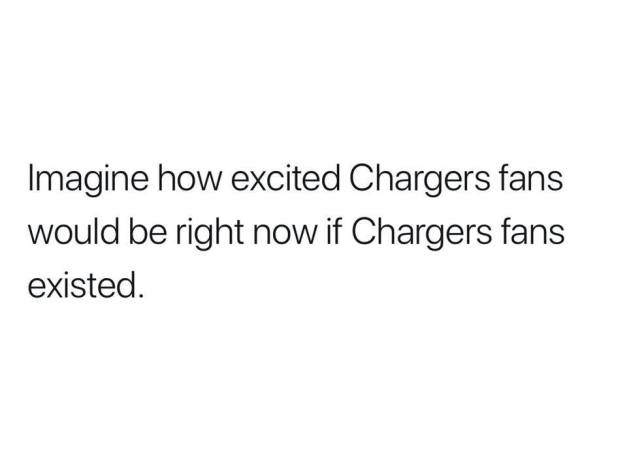 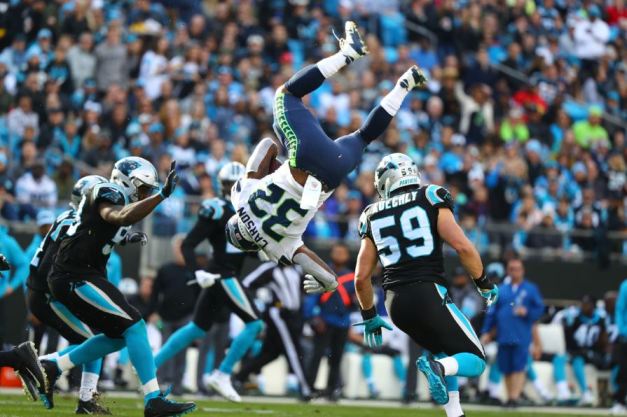 For the 3rd consecutive week, a team has put up 500+ yards and lost.

Phillip Rivers record 25 passes to start a game, perfect. He ended 28 for 29, for an NFL record 96.6% completion percentage. You also know you’re old but dedicated when you remember watching Mark Brunell set the record with the Redskins, and David Carr with the Texans

Brady passed Peyton Manning for the most all time passing yards, and is now the first person to accumulate 80,000 yards total offense

Drew Brees is on pace to demolish the single season record for passer rating. Aaron Rodgers 2011 campaign gave him 122.5, Brees currently is at 127.3 with 5 games remaining. In fact, if the season ended today, 4 QBs would be in the Top 10 (Rivers, Goff and Mahomes are on the all time leader board). Which is crazy since in 2017 nobody cracked the top 50.

Lamar Jackson ran it 26 times for his first start. Michael Vick, the quintessential running QB never had more than 15 attempts in his entire career. That truly surprised me.

The NFL’s Final Four in 2017 (Philadelphia, New England, Minnesota, Jacksonville) has a combined record of 22-21-1.

Changing of the Guard:

Something that’s rarely discussed is the change of team ownership. In the past 12 months however, this is happening to a large percentage of the league and could have a few repurcussions on the future of the game. Carolina, Seattle, New Orleans, LA Chargers, Pittsburgh, now Houston have all had ownership changes or deaths. 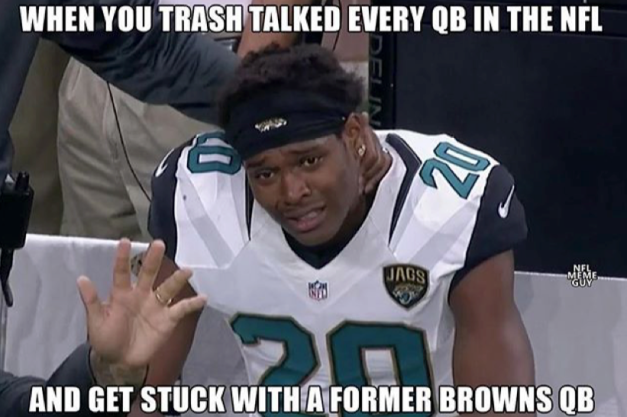 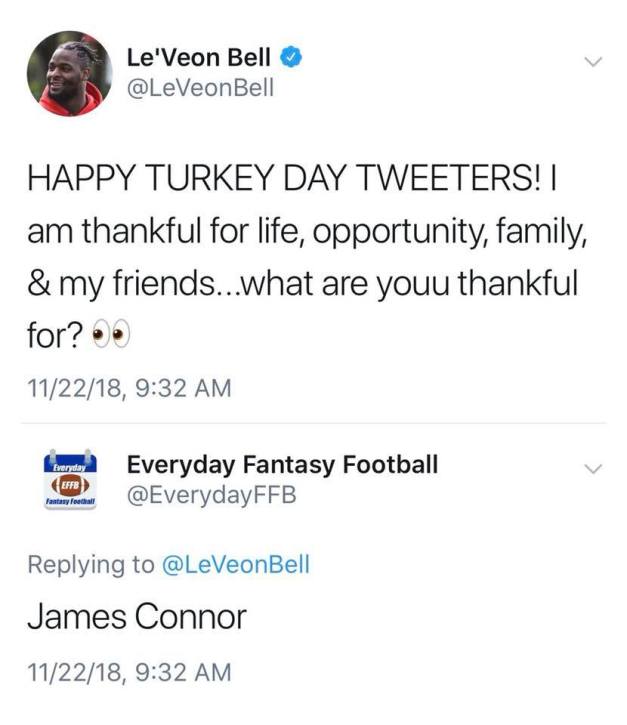 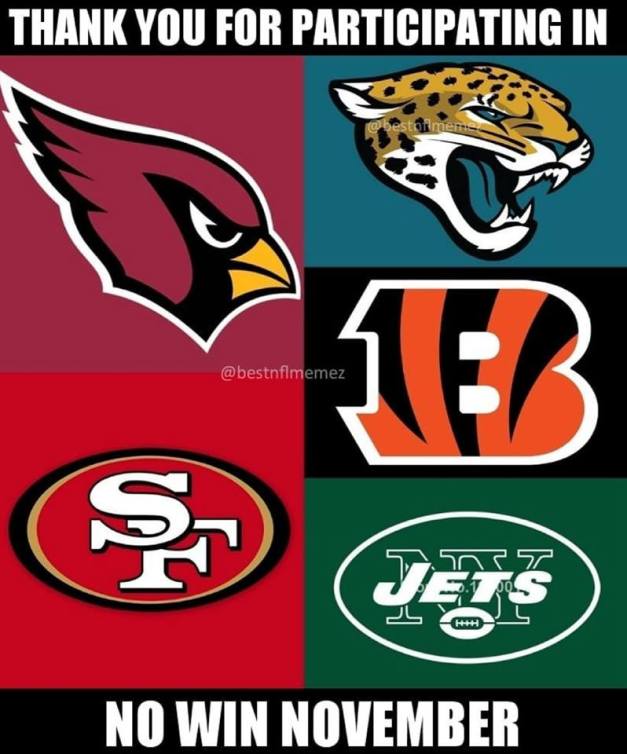 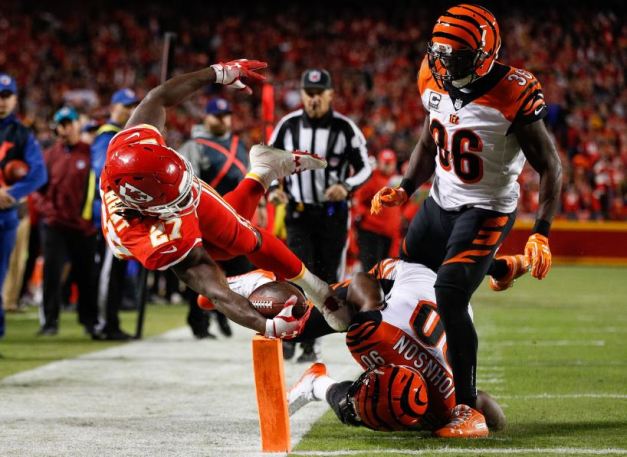 Patrick Mahomes, 22 TD passes is the most for a player’s first 8 starts ever

After having no 100 yard rusher in the past 5 seasons, the Lions have 2 through 6 games this year.

Odell Beckham Jr. is the fastest player to 5,000 receiving yards.

In the first three quarters at Philadelphia, Cam Newton was 9-of-17 for 68 yards. In the fourth quarter Newton was 16-of-22 for 201 yards and two touchdowns.

Chandler Catanzaro missed an extra point, missed a 30 yard FG in the 4th, but nailed a 59 yarder to win the game in OT

The Saints were 4 for 5 on 4th down conversions on Sunday, including one in the 4th quarter where a FG would have tied the game, or a failed conversion would have left them trailing.

The fact that somebody has 4 blocked punts in 2 seasons should not be underappreciated!

Patriots have scored 38 pts in 4 straight games, that has only happened 4 other times in last 20 years

Sequence of the Week:

Vikings CB Xavier Rhodes went down with an injury. As rookie CB Holton Hill came in, the announcers said “This is a great time to attack the rookie, watch for Darnold to throw that direction.” Throw he did, and Hill got the first interception of his career.

Doesn’t it seem like Odell Beckham Jr. and Amari Cooper have been in the league for several seasons? Odell is in his 5th season, but is only 25 years old. Cooper is in his 4th, and is only 24. That’s nuts to think they both could have another decade in them!

Arrest of the Week:

The Broncos just released their backup QB Chad Kelly (nephew of hall of fame QB Jim Kelly) after his criminal trespass charge. The homeowner also beat him with a vacuum cleaner tube. Can’t make this stuff up!

Saints at Vikings: Should be an awesome offensive matchup, Minneapolis Miracle part 2?

Packers at Rams: Could be an early playoff preview

Browns at Steelers: I’m praying for another tie 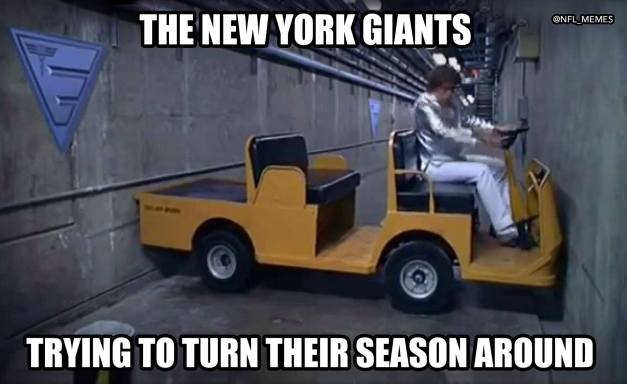 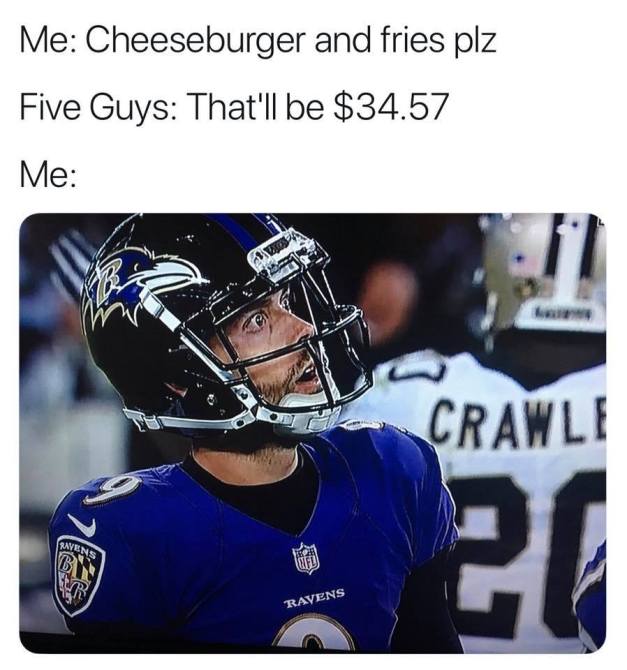 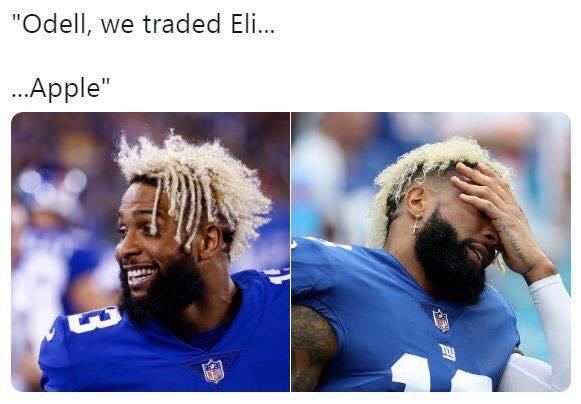