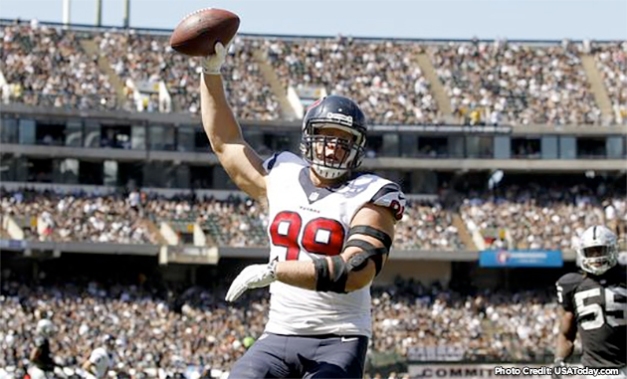 Another rag-tag post here, as yours truly was basking in the Caribbean sun over this past weekend. It was funny how parts of the resort was sparse, but on Sunday everybody was crowded around the sole bar that had a TV with American Football on it. Nevertheless, this is kind of an outside perspective of what happened in Week 13.

It’s that time of year for my favorite website, the ESPN Playoff Machine! Here you get to pick the last 4 weeks of the year, and see how the playoff landscape plays out. Here’s what I like about it: Pick the games with how you think they’ll play out, without looking at the seeds below. Once you’re done with Week 17, a few surprises emerge. With a lot of close battles, here is what FMQB has.

My Surprises: Dallas completely missing the playoffs at 11-5, Miami sneaking ahead of Cincinnati, and the Cardinals holding onto not only the division but the #2 overall seed. What’s fun about it is this is not my playoff predictions, but it takes the strength of schedule aspect into play with something that could be very realistic.

The Browns have been the leading QB controversy all season, and they just opened up the door on themselves this past week by benching Hoyer in the 4th quarter. Johnny Manziel definitely made his case, leading the Browns to their only TD of the day. Yes, Brian Hoyer has struggled greatly over the past 6 games, but he still has led the team to a 10-5 record as a starter. Cleveland made the right decision on Wednesday to stick with Hoyer. If the Browns were out of the playoff hunt (which they very well may be after this week), then it would be fine to get Manziel some reps. But Hoyer still gives them the best chance to win, and has led them into this situation anyway.

Stolen Stat of the Week:

With only 4 games remaining, the Buccaneers have both a shot at the #1 overall draft pick and to host a playoff game.

Denver’s kicker Connor Barth kicked 5 FG’s in his first game with the team. In 11 previous games, Brandon McManus only made 9 total.

There are 19 teams that have 7 or more wins

The 49ers had only 3 possessions in the 2nd half

A Quarterback tossed 6 TD’s in a game for the 4th time this year, which is the most in any season.

The Rams scored the highest amount of points since the year 2000 (the middle of the Greatest Show on Turf years). It was also their first shutout in 8 years

Ray Rice served 12 games of his 2 game suspension-turned 6 game suspension. I have been tracking and noting this stat all year. The arbitrator released a 17 page document explaining the ruling to re-instate Ray Rice. The #1 reason for the decision was the fact that the NFL had a policy in place and singled Ray out with an extended suspension. Sidenote: they say up to 4 teams are interested in signing Rice, but there’s no way he gets signed with 4 games left due to the court of public appearance. Still, it was the principal of the extended suspension that wasn’t fair. To compare, Josh Brent killed a teammate and got 10 games…

“Hey guess what, these guys hate the Patriots too!!!!” Fellow tourist halfway around the world, which made me feel right at home

“Bill, how would you compare Tom Brady and Aaron Rodgers?” Reporter

“They both wear number 12” Bill Belichick

“We’re not going to be 8-8 again this year, so you guys will have to find something else to talk about” Tony Romo

Dallas pulled off a convincing win last night, and guaranteed that they will have a winning season for the first time in 5 years. But they have 2 very tough games coming up against the Eagles and Colts, and you wonder if whispers of another December collapse will come with them being 3-3 in their last 6 games after starting 6-1. For a 2nd straight year, a 10-6 team very well may miss the playoffs in the NFC, so Dallas needs to take at least 2 more down the stretch.

Trent Richardson has vowed to jump into Dawg Pound if he scores against former team. Mike Pettine has essentially dared him to do it. Not that Richardson left on bad terms by any means (it was Cleveland who shockingly traded him), but will still be fun to see how many concessions are “wasted” by being dumped on a player should this actually happen.

Holy crap are there a slew of great games this week! Nearly half the slate has both teams fighting for playoff spots.

Steelers at Bengals: Battle to stay in the division

Panthers at Saints: Panthers last hope at a division shot

Ravens at Dolphins: 2 wild card potentials duke it out

Colts at Browns: Richardson and Cribbs go back to Cleveland. How will Hoyer do?

Patriots at Chargers: Chargers last chance to stay in the hunt, always play tough against NE