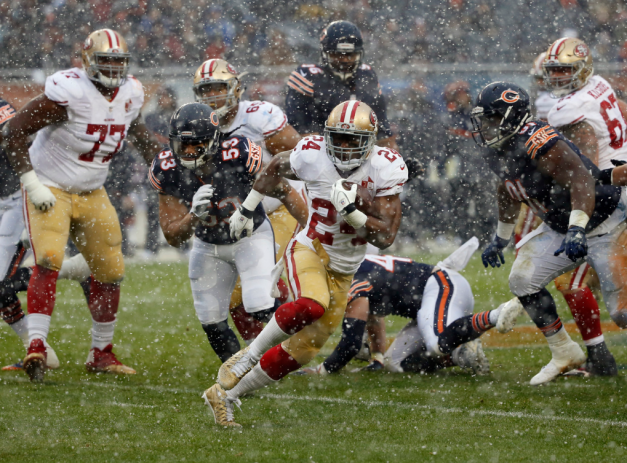 Avast ye! Mike Zimmer, that seadog, returns from a brush with Davy Jones’ Locker to coach the Vikings again. He’s not one to walk the plank and scuttle the season, so his team said Ay Ay captain and will give it the ol’ Heave Ho to take down those landlubber Jaguars and plunder a win in order to continue their quest for playoff booty….Sorry I couldn’t help myself, but why couldn’t they have been playing the Buccaneers or Raiders this week. WHY?!?!

We’re down to the final 4 weeks of the season with everybody on the same slate having played 12 games. The teams that make it to the playoffs always seem to be on a 5-1 or 4-0 streak, so keep an eye out for the streaking teams. As always, my favorite internet tool is back with the playoff machine! http://www.espn.com/nfl/playoffs/machine

If the playoffs started today (before Thursday), your division winners would be the Patriots, Raiders, Ravens, Texans, Cowboys, Seahawks, Lions, and Falcons. May be safe to say that NOBODY saw that coming.

Rule Change for the Better:

The NFL is hitting gold with it’s extra point rule, and the subsequent “return a blocked extra point or failed 2pt conversion for a TD” fallout. It completely adds another layer to the game, for the better, and makes it more exciting for fans. The Chiefs Falcons game was a back and forth contest, and having the Falcons go up by 1 but throw a “Pick 2” to lose the game is heartbreaking sure, but awesome!

Colin Kaepernick went 1 for 5, for 4 yards and was sacked 5 times. This was in 3 quarters of play!

Stolen Stat of the Week #4:

Derek Carr is the first QB in NFL history with 5 game winning TD passes in one season in the 4th quarter or OT.

The Bears and 49ers failed to complete a pass until 11:11 in the 2nd quarter.

Full Circle Stat of the Week #6:

Tom Brady is now the winningest QB in NFL History with 201 wins. Sort of fitting that he became a household name with his first Super Bowl win over the Rams, and win #201 was over the Rams.

Khalil Mack has 3 strip sack/fumble recoveries in the 4th quarter in the last 4 games along! Nobody else in the NFL has even done it once.

With last night’s loss, Oakland went from the #1 seed to the #5 seed.

The streak of the Lions trailing in the 4th quarter and having a game within 7 points is now over. So are the Dolphins and Giants winning streaks. Brees also failed to throw a TD pass at home for the first time since 2009.

Newton getting benched for the first series was the best thing that could have happened to him. Kudos to Ron Rivera, you’re bringing a sliver of humbleness to the cockiest player in the NFL. I was shocked to hear analysts say that Rivera should treat Newton differently, so I appreciated his stance saying that he was a part of the “team” and not bigger than it. Granted, Jason Garrett cut 2 players for not wearing ties, of course you don’t do that to your QB. But he just showed his entire team who’s in charge. I will admit that merely not wearing a tie is a bit of a ticky tack Now, there are rumors out there that it was more than a dress code violation, which further warrants it.

Path of the Cowboys:

The Cowboys have an opportunity to clinch the #1 Seed with 3 games remaining! The Cowboys need 1 more win, and just 1 loss from both Det and Sea. This would mean that Jason Garrett could give his team an entire month off to heal before playing the next meaningful game! What puts them in an awesome situation is they could do this while still having a top QB in the rotation and still be in a great position to win those games. Romo could play the last month, get some reps/show other teams he still has it. The only downside I see is “rust” or momentum. Keep them in the filmroom, or play it like preseason where the first group gets the first 3 series and then they’re out.

Thursday Night Football and the Oversaturation of the NFL:

There was a lot to do about NFL ratings earlier this year being down so much. Many theories abound, I think you can blame the election, the oversaturation of the NFL, the other mediums to get highlights, quality of play/officiating, Colin Kaepernick, violence/concussions; all combined. I think one sticks out though. As diehard a fan as I am, I would say that I’m starting to get a little overwhelmed with the football options to me. I don’t feel the need to watch football for half my week. It’s probably what killed American Idol too, because you had to watch every night to stay in the loop of what was going on. But at the WORST, there is a 69 hour break between football games (Starting Sunday, you have 21 hours until Monday night, 69 hours until Thursday night, and then 62 hours until Sunday morning games). There’s just too much of it. A normal week, you could spend 15 hours watching games! Unless you’re a diehard fan, a bachelor, or about to become a bachelor, nobody is going to watch that much of it. This is a huge reason ratings are down.

Finally getting around to my point, there was a rumor that came out saying that the NFL may get rid of Thursday Night Football after next season. And I’d have to say that I don’t think that many people would be disappointed with it. 90% of the matchups are Titans vs. Jaguars, Bills vs. Browns, or Rams vs. 49ers. They set the timeslot up to fail by putting in crappy matchups. I get excited since the Rams don’t get a primetime game ever, but I’m guaranteed to be able to hit up a happy hour and watch my team once a year. But that’s once a year. The NFL should eliminate it up through Week 12ish. Have Thursday games start with Thanksgiving and go through Week 16. Having 4 or 5 Thursdays a year would at least be a novelty, and ruin the oversaturation.

“Even Stevie Wonder can see it,” Odell Beckham Jr.

College Note of the Week:

I never go into college football on here. Heck, despite me being a rabid NFL fan, I hardly watch any college football at all. The playoff system is the best thing that’s happened to the sport however. And I just want to point out that when watching the Men’s Basketball tournament, #s 69-73 bitch about not making it into the tournament. Nobody mentions that a #16 has never beaten a #1, but I digress…Under the old BCS, teams #3 and #4 had a beef, now it has simply shifted to #5 and #6. It’s 10X better than it was.